Meizu has officially announced Meizu m2 in India for a price of Rs.6,999 exclusively through Snapdeal. 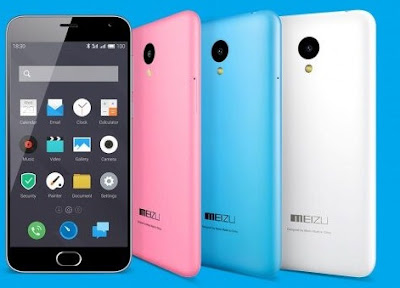 Meizu m2 features a 5 inch screen and is powered by a quad-core processor clocked at 1.3 GHz along with 2 GB of RAM. Now coming to its camera specs, the M2 sports a 13 MP rear camera with LED flash and a 5 MP front facing camera. This dual sim 4G LTE smartphone weighing just 131 grams also comes with 16 GB of internal storage which is expandable up to 128 GB via SD card. It houses a 2,500 mAh battery which can give up to 12 hours of internet usage and 23 hours of calling time.

Meizu m2 will be exclusively sold through Snapdeal in flash sale model. 1st flash is scheduled on 12th October, 2015 and the registrations for the same has already started. The Meizu M2 will be available in Pink, Grey, White and Blue colour variants with a price tag of Rs.6,999.
Email ThisBlogThis!Share to TwitterShare to Facebook
Newer Post Older Post Home