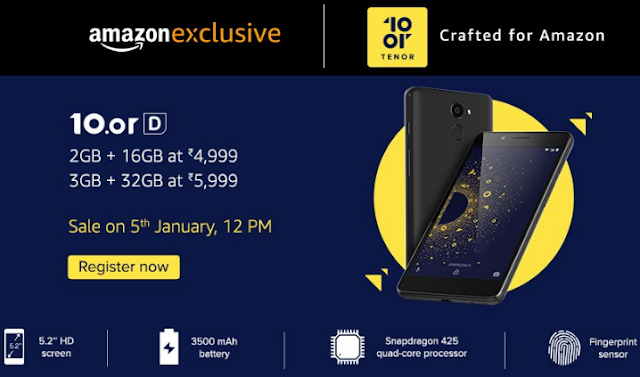 It sports a 5.2 inch HD display and comes powered by the Android 7.1.2 out of the box. Under the hood it comes equipped with a quad core processor alongside 2 GB of RAM. The handset holds 16 GB of inbuilt storage which can further be expanded via SD card. On the photography department, there is a 13 MP primary and a 5 MP front facing selfie camera. Notably this phone comes with two sim slots and a dedicated microSD card slot. Also there is a fingerprint sensor just below the back camera. It weighs just 150 grams.

10.or D will be exclusively sold via Amazon.in starting from Jan 5, 2018 in Beyond Black and Aim Gold colour variants for Rs.4,999. There is another version of the smartphone with 3 GB RAM and 32 GB memory which will be sold for Rs.5,999.
Email ThisBlogThis!Share to TwitterShare to Facebook
Newer Post Older Post Home